Dave Torres and Roshua Adela Daclan dominated the 8th TDA Dancesports Championships in Singapore Polytechnic on July 7, 2018, bagging a total of 6 golds for the duo that represents the Philippines in the competition.

The first ever international competition of the dancesport couple was supported by the Davao Doctors College administration. Incentives from the school also await the winning athletes. 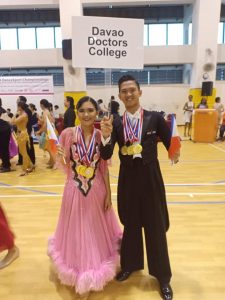